Fairhaven is a beautiful surf beach located on the Great Ocean Road between Anglesea and Lorne. This magnificent stretch of sand and surf takes in Aireys Inlet, Fairhaven, Moggs Creek and Eastern View.

It all started at Fairhaven in November, 1957 when a public meeting at a church hall in Aireys Inlet made the community decision to form a local surf life saving club. This meeting was initiated by local identity Albert Suters who became the first club secretary. There was strong discussion about whether the club would be located at Aireys Inlet, near the mouth of the Painkalac Creek or at the more open beach site at Fairhaven. Fairhaven proponents won the day and the club began its service to the community located on the magnificent stretch of beach.

The first Bronze Medallion squad was formed and went through their training to become qualified early in 1958. This enabled the newly formed club to become affiliated with the State and National bodies and official beach patrols to commence.

Earlier beach supervision had its beginnings from a small, galvanised iron shed in the sand dunes where basic surf life saving gear had been stored for years. The shed and the club’s first reel had been provided years earlier by a family in memory of their daughter Amy Patterson, a young school teacher who had lost her life at the Fairhaven beach in 1937. The “Amy Patterson” reel had been purchased by the family from the West St Kilda Life Saving Club and is still a prized piece of club memorabilia.

Throughout the formative period Fairhaven was strongly led by the George Nutbean who was Club President for ten years. George went on to become President of Victorian State Centre (1970 – 74). A major incident in the club history occurred early in the 1959 season when patrol member Chris Holland was seriously injured in a shark attack while on a training swim at Fairhaven beach.

Fellow patrol member and friend Russell Hughes paddled his surf board out to rescue Chris, bringing him to the beach where other patrol members administered emergency first aid to very likely save his life. Russell was awarded the Silver Medallion for his bravery and the club received a Certificate of Merit from the Surf Life Saving Association of Australia.

The Fairhaven clubhouse, planned and built by members and supporters, was completed in 1960 providing a focus for club and community activities. Throughout ensuing years various additions and alterations have taken place including a communication and observation tower, gear storage area and amenities and social facilities for members. Bunkhouse accommodation was built nearby and was used extensively by members until it was destroyed in the Ash Wednesday bush fires.

The devastating Ash Wednesday bushfires caused major local community disruption. Fairhaven club, as an integral part of this community was severely affected. As well as destruction of the bunkhouse, many members lost their homes and a very difficult period had to be faced. The club met the challenges and emerged with its reputation for hard work and a team approach strongly intact.

Community support through the 3AW Bushfire Appeal enabled a modern bunkhouse and two self contained family units to be built for member use.

Fairhaven’s aqua and orange colours have been consistently to the fore in surf life saving competition.

The 60’s and 70′ saw outstanding March Past results with many pennants and state championship medals being won. Fairhaven also developed a strong record of success in malibu and longboard events. Throughout the years competition involvement and performance has been inconsistent.

However, over recent times huge effort and commitment have resulted in strong surf boat program that has been rewarded with outstanding results in state and national competition – even a world championship at Masters level. Fairhaven is currently recognised nationally for the strength of its surf boat program.

The significant and growing growth in numbers of active female members, their competition successes, patrol and leadership contribution together with administrative input is noted as a very important aspect of club development.

Fairhaven Ladies Auxiliary was formed very early in the club’s life and has been an important, integral feature for many years. Throughout a long period the Auxiliary displayed great dedication and energy as they organised social activities, raised funds, catered for numerous carnivals and club functions and generally made a very big contribution to club development.

Nippers have been part of the Fairhaven scene since the early 70’s. From humble beginnings with a small group of local and members’ children and a few willing helpers the club nipper program has grown to become a very popular and important activity on the summer calendar. The program provides a steady source of recruitment to active membership and is highly regarded for its contribution to the personal growth and development of young people.

Recruitment and training are the lifeblood of any surf life saving club and Fairhaven has experienced highs and lows throughout the years. Interestingly, as early as 1963 the club recognised the benefits of establishing links with schools. This pattern has continued to the present with pre-season training camps and strong school/club involvement still providing a constant source of active members.

Training is also a traditional feature of the busy holiday period at Fairhaven beach.

Fairhaven Surf Life Saving Club is very proud of the community service that it provides and recognises the enormous contribution of many people throughout the years since 1957.

The club looks to continue its development and meet future challenges as it has in the past – with optimism, hard work, friendship and a united team approach. 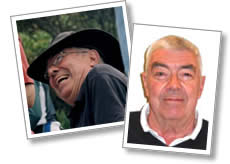